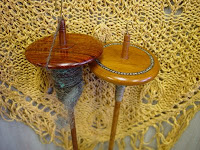 It's just about a month till the world's biggest fiber party ever, NY Sheep and Wool Festival in Rhinebeck. It's like be there or be square. Fur shure.
Announcing a change to my teaching schedule. I'll still be teaching a two day color spinning class Thursday and Friday, but instead of Lace Knitting in the Round, I'll be teaching a half day beginning spinning class Saturday afternoon. It's for first time spinners and we'll use drop spindles to spin my handpainted roving. If you've been wanting to learn to spin, this is a very easy, step by step class. Plus we play a little with color so it's anything but boring. I'll bring an assortment of groovy spindles from some of the woodworking artists represented at the festival, so you'll have a chance to try some of the spindles out before shopping.
The class is half full but there's room for a few more. Sign up soon.
Posted by Lynne at 6:50 AM 2 comments: 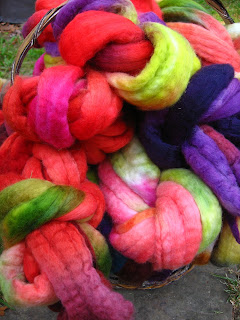 If you've been hankering to take my color spinning class and couldn't make it to Harrisville this year, check out my 2008 October schedule.
Oct 11 and 12 I'll be at the marvelous Threadbear in Lansing, Michigan. Saturday and Sunday are two separate classes, Saturday's "Spinning and Color Fundamentals" is geared for novice to intermediate spinners who just want to come and have some fun with handpainted rovings and learn (or hone) come color spinning techniques. Sunday's "Advanced Color Blending, Color Theory and Beyond" will focus on color theory, contrast, blending, plying combinations of colorways with an eye towards using these yarns in a project.
The following week I'll be offering two classes at the New York Sheep and Wool Festival in Rhinebeck, NY.
Thursday and Friday, October 16 and 17, I'll be offering a two day long color workshop, "Hands on Color". We'll cover a host of color spinning and blending techniques. This class is an out and out color feast and will interest many levels of spinners, but it is not a beginning spinning class. Please know how to spin and be reasonably comfortable at the wheel or spindle before you sign up.
Saturday October 18, I'll be offering two sessions of Knitting Lace in the Round. I"ll get you started knitting a shortie version of my Spiralling Leaves Fingerless Gloves and talk about the differences between knitting lace in the round and knitting flat lace. I'll provide beautiful yarns for this class, both handpainted variegated yarns and subtle naturally dyed solids and tone on tones.
Please know that these are not dye classes. From now on the only dye class I will teach is at Harrisville Designs, once a year. Next year class will meet August 3-7.
Posted by Lynne at 5:36 AM 2 comments:

The Head Between Two Heads 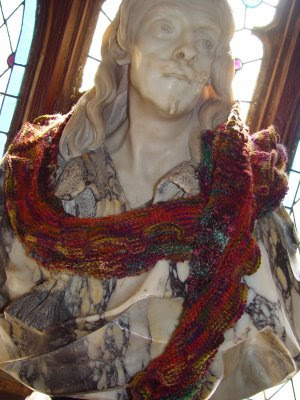 I'm caught in a time warp. Living on the campus of my old alma mater, I sometimes don't have any idea what year it is. This isn't entirely my fault either, as I see young men walking through the quad with rosy cheeks, seersucker jackets and bow ties.  I shake my head like Elmer Fudd (I tought I saw a wabbit) but they are still there. Not only do they look as though they stepped out of the 70's, they play Allman Brothers and Led Zeppelin (not complaining, mind you). It's just weird. I wanna see more goth and I'm not talking architecture.
So I took the opportunity to walk through the old halls, the haunts of ages past, with model Elizabeth. What better place for a photo shoot than a "bastard gothic" university campus loaded with carved wood and stained glass? I wanted to get into Convocation Hall and take a shot against some blisteringly beautiful stained glass windows. You can stand right next to them on a carved balcony...wild. But Convocation was locked...floor re-finishing in progress. Why complain? Right outside the double-wide half-ton walnut doors resides "Sir Walter Really", the Head Between Two Heads, his marble nose still stained even after many scrubbings from cigarettes parked there by students taking brief relief 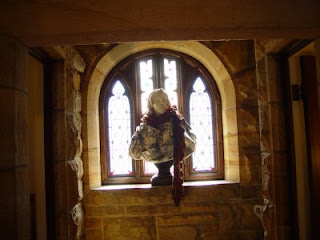 between classes. Notice the doors to either side of the alcove. Men's on the right, Women's on the left. First rate facilities, albeit a mite tight. To Sir Walter's right is the stairwell leading up to Breslin Tower, the clock that chimes the Westminister Chimes every quarter hours. Some things never change.
Sir Walter is wearing "Superruffly", my newest design. The Superruffly pattern teams up with the Superfluity Kit, so now there are two choices to knit with that ensemble...a wrap and a scarf. 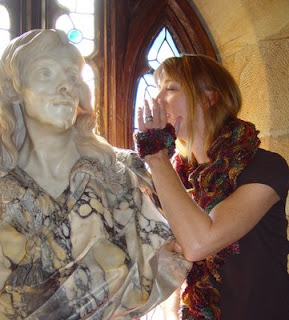 Here's Elizabeth (also an alumna of said alma mater...nothing like a little nostalgia) whispering sweet nothings in Sir Walter's ear. Captions, anyone?
Posted by Lynne at 5:28 AM No comments: