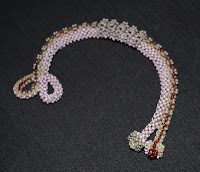 So much is going on these days. Shakerag Workshops are over and life is back to semi-normal. I'm busy dyeing for the Monteagle Sunday School Assembly Cottage Tour and Bazaar on Wednesday July 15 in Monteagle, TN. Jan Quarles of Daily Fibers and I will have a booth again this year and a good time will be had by all. Two weeks after that I'll be heading up to Harrisville, NH for my annual workshop. I'll be staying longer this year. After our weeklong spin, dye, knit intensive is over, I'll teach a three day spinning and knitting workshop (no dyeing), ala our recent freeform feast at Dubose Center in Monteagle last May (see "Hands On Color a Huge Success"). Although the spin, knit, dye class, August 3-7, is full, the following three day Spinning for Colorwork Knitting workshop, Aug 1 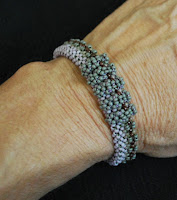 0-12, still has a few places available. So if you have been wanting to take one of my classes, this will be a great opportunity.
Recently I had the exquisite pleasure of attending David Chatt's workshop, "Achieving Nirvana Through the Fully Realized Beaded Bracelet". Laura Shea of the "Plato Bead" and other marvelously beaded mathematical spheres was in attendance complete with an "OM" ball that droned the chant at the slightest jiggle. It's first utterance mooed forth as David bent to sit for a one on one lesson with Laura and bumped the table, sending us in to raptures of laughter. Subsequently, the orb sang at each "aha moment" and some not so "aha moments". What a great class we had. Deb from New Hampshire brought amazingly beautiful freeform beaded scarves, Marti and Shirley from Miami brought such stash (talk about Nirvana) and engineered and afternoon latte cart with my espresso machine from home. David loves his beverage. Jason from Austin and Eryn from California waltzed into class with no experience in right angle weave and waltzed out with beautiful bracelets. Alma and Judy did such beautiful work. And I stitched my first ever bracelet in right angle weave. As we all may know, beadwork 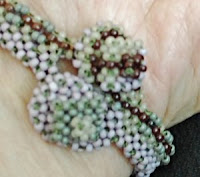 can be tedious, all those tiny holes and invisible threads and sharp pointy needles, so levity was rampant at times (the OM ball being the ice breaker), even though every time people wandered into our class we were quiet and serious, little angels that we were. By the last day of class we were watching Mrs. Miller on David's computer. After lunch that day, Shanna Leino, the teacher of the Coptic Bookbinding class, made a special appearance to perform with Eryn Talevich and I in a favorite skit from SNL, the Witches Brew originally performed by Sherri Oteri, Molly Shannon, Ana Gastheyer and Cameron Diaz. A group of three witches brew up a cauldron gone bad and try to describe the obnoxious odors that spew forth. How we managed to perform it without laughing (well, maybe a titter) was amazing. BTW, guys, Shanna is from Harrisville, NH. Think we can talk her into performing for our class this summer??? Huh, Shanna, huh??? All kidding aside, we had an awesome time with David. He showered us all with individual attention, twice daily individual conferences over our bead tables. Everyone got what they came for and more, including the confidence and knowledge to engineer our own clasps (gasp). And David brought boxes and boxes of beadwork which we all found ourselves surreptitiously carrying around the room, trying on, hoarding at our work stations and almost unconsciously walking off with. Thanks, David! Class was epic.
I only took the one class this year. There were so many others of note, one being Jorie Johnson's felting class, which Eryn took and did the best work she'd ever done in a workshop. Also there was Susan Shie, Ruby Chisti, Judy Dominic, Shanna Leino, and more and more. Next year India Flint will come all the way from Australia to give two separate sessions of natural dyeing. Sign ups don't happen till October at the earliest or I'd be on the list right now.
Posted by Lynne at 5:07 AM No comments:

The Tennessee State Museum in Nashville, TN, is hosting a unique event August 22, 2009. The following is the official flier for the event. I'll be hosting the spinning workshop, a living exhibit. For more info or to sign up for one of the workshops described in the following,contact Elaine Aldous at the Tennessee State Museum. This is a unique opportunity indeed. Even if you don't sign up for the workshops you can come and watch.

The Tennessee State Museum and the Handweavers Guild of Nashville are partnering to offer a special day at the Museum, centered around historical techniques for cloth making and how they can be applied in modern artistic creations. Experienced weavers and spinners, school children, teachers and the general public will all find something of interest.

Specialized Artistic Workshops: From 10:30 a.m. to 4 p.m. there will be two concurrent workshops. One will concentrate on spinning; the other on weaving. Lynne Vogel’s workshop will focus on spinning fine yarns using currently popular fibers and combining fibers in experimental yarns. Geri Forkner’s weaving workshop will explore the different effects of historic weaves when used both traditionally and with modern interpretation/fibers (including using some experimental yarns from the spinning workshop). The interaction of the two workshops will be a unique experience, opening new vistas for participants. Vogel and Forkner are both nationally prominent, Tennessee-based master-teachers. Workshop participants may sign up for either weaving or spinning (registration form below). One place in each workshop is reserved for a Metro school teacher (scholarships available). The workshops are for experienced spinners and weavers only. Participants must supply their own equipment.

For Museum Visitors (Free Admission – 10 a.m. – 5 p.m.) Visitors may watch the artistic workshops, see the progression from fiber to fabric, and try their hand at drop-spindle spinning and/or cardboard loom weaving, while learning about the historic spinning and weaving equipment exhibited in the museum.