So many of the women that staggered through the portal of the Alfred Dvane Bell Library and climbed the stairs to the Upper Room for Hands On Color: Fiber Salad this past weekend were coming off a particularly bad week. At least half the class had had trial after trial. But as soon as they set up their wheels and started spinning with like-minded women, the Be-Here-Now-ness of the moment took hold and all that hectic started to melt away. Gandhi was on to something and we all knew it. Everyone went home with new or resurrected skills. I love to hear "I thought I couldn't do that but I can." We had poets, alpaca owners, dog lovers, teachers, family members, birthday girls, two Janets and a Jan, and two Marys (almost had three) and a playwright come comedienne. It was a great mix, funny, comfortable.

On Saturday we all set to work with enthusiasm. After lunch we had awesome cake to celebrate Janet K's birthday. And kept spinning and spinning. Most of us threw caution to the winds and ate more carbs in two days than we do all year. But sometimes you just have to do it.
So thanks to everyone who came to join in the fun and thanks especially to Jan Q for her marvelous assistance, both organizing and during the event. Special thanks to Darlene and Christina for helping clean up after the fact. Now that's dedication.

For more photos of the event, go to my Facebook Gallery. 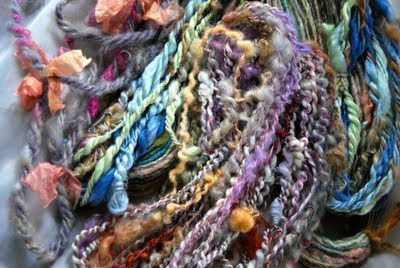 Here's an assortment of the yarns we'll be spinning this weekend in my workshop Hands On Color: Fiber Salad! at Dubose Conference Center in Monteagle, TN. A good time will be had by all! See you all soon!
For more photos, click here. 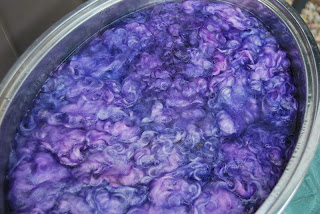 I really admire writers who can take a laundry list of items or events and jigsaw them into flawless written composition. It takes a certain talent for organization, one I feel I seriously lack. I am a collector, a beachcomber, a frigate bird, bringing home all sorts of brick-a-brack that just sits in a clutter. I need one of those cavernous pantries to house all the found antique bottles, bird bones, marbles that are worlds unto themselves. You know the kind…a huge walk in closet with multiple rooms lined with deep, white, painted shelves smelling of clean and fresh. There was such a place in Ozma of Oz in the Nome King’s palace, a room full of stunning ornaments. Of course all these ornaments had once been people (or, as in fairy stories, all sorts of beings from a living sawhorse to a stick figure with a fresh pumpkin for a head who had to keep carving new ones before the old one rotted, sprinkling it just in time with the powder of life). Each member of Dorothy’s party would go in to extricate their friends by chosing the right ornament, only to fail and be turned into ornaments themselves, Ozma included. Only Dorothy managed to break the code of who was who (evidently the Nome King had a sense of humor about his transformations) and free all her friends. I certainly don’t expect my ornaments to suddenly come alive when touched and leap off the shelves to do the dishes (would that they could). But I would certainly settle for room and enough “Martha Stewart” to arrange my found objects. And then I had this dream.

Deep in the caverns of my mind, it seems, I am hard at work arranging. But it isn’t the beautiful stuff. It’s the garbage. To whit, in this dream I found myself standing beside an enormous, cavernous dumpster, curiously about the size of my studio (a converted Model A garage), tiny by studio standards, huge by dumpster ones.

For some crazy, dream induced reason I had thought this dumpster to be perfectly good storage space and had spent some time filling with all the sheep’s fleece I had washed and dyed for my upcoming workshop only to find to my extreme dismay that there was a dead animal, a wet one at that, lying in a muddy sludge on the bottom of a pile of all that good stuff I’d already put in. How did it get there? Wasn’t my work, no sirree Betty. Now I had the added problem of getting the body out of there and fast, but the walls of the dumpster were some 15 feet high and I had no ladder (I had been lobbing my stuff in over the side). People walked by as they will do in dreams. I told each one about this problem, but no one seemed at all interested. In this apathetic environment of passing men wearing overcoats and dour expressions, somehow I had to fix this myself, so I paid a visit to a gypsy seer who only grinned at me like the Cheshire Cat and told me I needed to…and I woke up. Damn.

As the waking haze of this stinky mélange of images began to clear, I realized that I had put my day in the dumpster. Literally. Since I live on a college campus and it being graduation week and all, large dumpsters made their annual return to four of the local dormitories, the best of the lot having been parked across the street from our house in full and tantalizing view. I’ve found so many great things over there in years past. Lamps (working), a perfectly good microwave that now lives at Harrisville Designs for use in my dye classes, a cooler on wheels in which I cart soaking fiber out to my dye table, a perfectly good green vinyl ladies’ sized armchair that only needed a little upholstery job and a large under-the-bed bin with a tiny crack in the lid. A piece of duck tape later and it was ready to house you name it. I drooled at the possibility of this year’s score only to find garbage in there…garbage! My disappointment took its first opportunity to leap into dream world.

Naturally, the first item slated for “discard: was the photo a friend had emailed of a “strange critter, please identify”.  As I recognized the poor expired animal as a raccoon who had met an untimely drowning, I wondered what in twenty heavens I was going to do with this memory burn. Next in line was, you guessed it, the brown sludge. I had been busy washing greasy fleece for said workshop, squeezing gallon after gallon of brown liquid from curly locks down the drain, singing a mantra of “washing soda, washing soda”, trying to keep the wool from following the sludge down the rabbit hole. My studio was so full of damp fleece that it looked like a sheep’s whorehouse. And I had been lobbing damp fleece onto a screen door I’d installed on the rafters as a drying rack. In contrast, I had also dyed beautiful habotai silk yardage that hung like dancing maidens from the rafters. Thanks, hubby, for pointing out that a preference for dyeing silk over fleece was a no-brainer. (Boy, would I like to see your sweet freckled hands in a vat of fresh lanolin and pasture perfume.) Beneath the silk lay my tarot deck in a handmade silk bag, beckoning me back from all the hot and harried hair washing to resume my recently renewed interest in its lively archetypal characters, a respite I looked forward to like Sisyphus looked forward to the end of his travail. Next to the tarot bag lay a skein of wildly autowrapped yarn I had dubbed “Cheshire Cat” because of the spiralling stripes’ resemblance to his ringed tail. Evidently it had made friends with the cards in my absence.

I have to say I was proud of my brain. Now if I could only coax it into arranging inspirations instead of detritus, I’d be in business!


Well, I couldn't go to Maryland Sheep and Wool this yearso I drove over to Kim Caulfield's Far Out Farms for a play day on her giant carder Friday. It's a beautiful drive through rolling green hills of Southern Tennessee. Kim, Robbie (one of her 6 great pyrenees dogs), and several sheep met me at the gate. Ewes with new lambs dotted the fields and inner yards like white flowers. Before getting down to work we admired a newly dyed fleece, checked out a 30 minute old lamb, and ran the gauntlet of her other dogs, and trundled more wet fleece down for a fresh dyepot. To my great joy, her top dog Nora came up for a pet. Soon she was nudging me for more love. Great thing (sorry) about Pyrs is that you don't have to lean over to pet them. This is quite an honor, one I certainly won't take lightly.

Once the dyepot (or should I say cauldron...it was big enough to hold an entire cotswold fleece) was going, Kim demonstrated some simple carding of picked romney fleece that she'd dyed in various shades of muted iris purples and lavenders, a color not unlike the natural dye logwood. She laid the colors out at random. Once we'd carded half the fleece, we laid some opened white kid mohair locks on one side of the fleece on the feed belt. The resulting roving was subtle and shiny, very elegant. 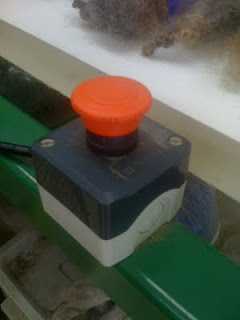 the kill switch
For our second run we shot a grey romney fleece and some turquoise and royal blue mohair locks through her picker...another respectable machine. It would literally inhale fiber off the feed tray and shoot it into an enclosed room the size of a decent closet. I really wished I could have found a place to put my camera (just my phone, dang it) so we could see the fiber exploding out of the picker. 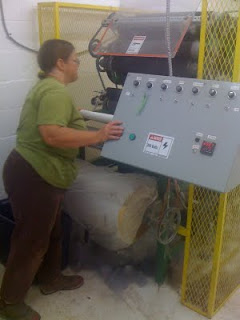 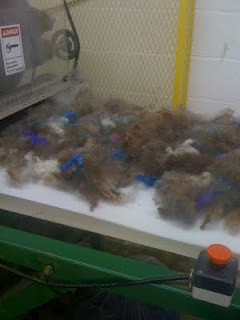 Fiber going in.
See the above video to watch carded fiber coming out.


This yarn sample is one ply corespun spiral plied on a fine worsted single from the same roving. It's fluffy and light and very soft. You'd never know it was romney by the feel of it.
Posted by Lynne at 11:32 AM 2 comments: 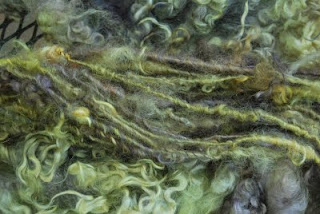 Last call for registration for Hands On Color: Fiber Salad! Evening of May 20, all day Sat, May 21 and Sun, May 22, 2011 at Dubose Conference Center, Monteagle, TN. Spinners, come play with us! It's a workshop and a retreat with mini fiber market. Informal spin-in and fiber market Friday evening, workshop from 9-4 Sat and Sun. It's an art yarn class covering all angles of combining different fibers and materials in yarn. We'll learn how to use wool locks in curlyspun and tailspun, how to handblend for that crazy drum carded look without the drum carder, and how to join various materials at all angles. For more information, email Jan for flie 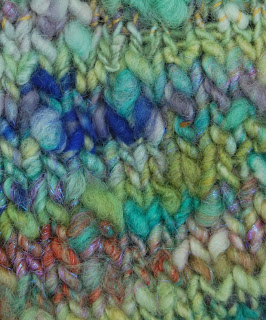 r and information form. There are still a few spaces available in this awesome class. Class is for wheel spinners with a reasonable amount of experience at the wheel. Not recommended for beginning spinners.
Posted by Lynne at 6:38 AM No comments: