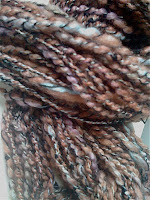 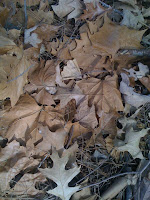 New! Tres elegant yarn version of tan and blue, top left! Recently I've been drinking in the beauty of a very low key color; tan. No matter where you live, you see it everywhere: fallen leaves, sand, concrete rubble, cardboard and brown paper bags, camel hair coats. Whether it's boring, serviceable, or elegant, depends on it's usage an it's surroundings. So I've chosen it as my first pick for a series focusing on color; how to look at it, how to mix it, how to use it.
Since I'm writing this mainly for dyers of wool and silk, I'll be talking about mixing color with natural and acid dyes. I'm not going to give actual formulas for mixing colors, but just talk about where they lie on the colorwheel, how they are related to other colors, what effects they have in different situations. 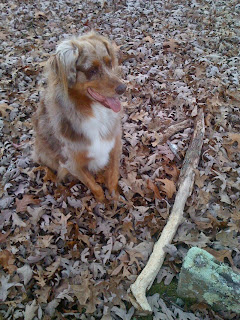 I chose tan because I'm surrounded by it these days. My dog
is almost lost in it. It isn't a color I wear well, so I don't use it all that often in dyeing, unless I'm using natural dyestuffs like tea, walnuts, onion skins, eucalyptus, tree bark, etc. The colors from these materials are stunningly beautiful in their simplicity. But how to mix this color with dyes? Actually, most tans are a form of muted orange, a dilute brown. If you mix orange with it's compliment blue, most of the time you'll get some form of brown. dilute the brown and tan will appear. But what orange and blue do you use? Start with a yellowish orange and add turquoise and you'll get a olive. Start with a reddish orange and add cobalt and you'll get a dusty grape. So how to arrive at Tan? Start with an orange and a blue that are closest to being true compliments, diametrically opposing on the color wheel. For instance, the copper orange in Monk's face and legs is complimented by the blue paint on the leaf above. The following photos revolve around this palette...tan that's a mixture of orange, blue. But this isn't the only way to get tan. 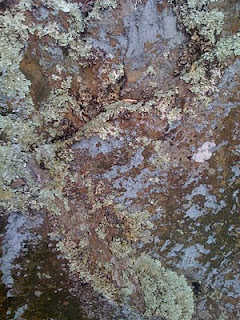 This photo of lichens on sandstone looks like tan from a distance but on closer inspection has very little actual tan. The eye mixes the colors present here and sees the rock as a kind of tan. Colors are olive, sage, bluish lavender and rosy brown. Orange is suggested by the yellowish cast in the sage, mixed by the eye with the rosy hue in the brown. Blue appears by default in orange's split compliment of lavender and olive, which mixed together would make a dull blue. Even though none of these colors are vivid, on close inspection they tend to enliven each other into a sum that is greater than its parts.
Continuing with the theme is an image easily found on a college campus. There is a spot of rusty orange under the beer can, a touch of blue in the label, and all is surrounded by gorgeous browns, tans, olives. Olive brown is usually arrived at by mixing yellow orange with blue or turquoise like I mentioned above. Sometimes a touch of violet softens the mix. On closer inspection, reddish rust and forest green appear in places, another complimentary pair. Mixing browns by using two pairs of compliments can give you some stunning tones. 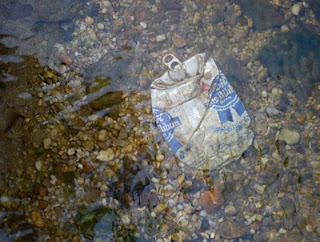 The last photo shows compliments of muted orange (in the form of tan) and blue plus compliments of pale yellow and very muted violet...actually violet grey. The grey in the large trunks and in the reflection of the branches in the upper right hand corner of the photo can be arrived at by mixing violet and lemon yellow. The resulting neutral can be shifted with a touch of orange or blue. Anything but boring. 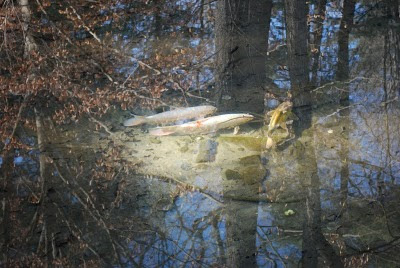 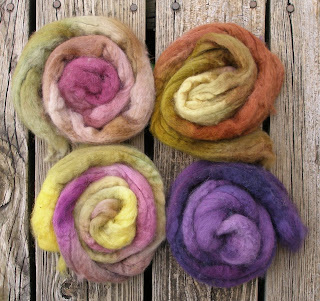 Three Waters Farm is now offering some really cool fiber color combos on their etsy store. Here is 4 oz of Blue Faced Leicester for $14 ($2 off the usual price) in a grouping of approx 1 oz per colorway. When I saw these, I thought of Starry Nite. Great way to get a sweet group of small amounts of chummy colorways for this pattern. Then the more I looked at these, the more my ideas started snowballing. What kind of gorgeousness could you do with these little gems?
Posted by Lynne at 7:55 AM 2 comments: